Dubrovnik and the Two National Parks

Dubrovnik and the Two National Parks

An overnight stay in the glitzy yacht-town of Grad Hvar on the island of Hvar, we boarded a surprisingly speedy Catamaran ride at 8am for Dubrovnik – a city known as the “Jewel of the Adriatic”, and more recently as ‘King’s Landing’ from HBO’s Game of Thrones. Be the reference 20th or 21st Century, the walled 13th Century city has an unmistakable mystique of high perimeter walls, multiple church towers in the center, and smooth limestone stone streets that are polished from nine centuries of footfall.

We chose to stay within Stari Dubrovnik, or the ‘old town’ part of the city. This means living in deep in the mix of many steep (and uneven) stepped side streets that all spill into the middle ‘bowl’ of the city, with the heaviest traffic being the ‘stradun’. Even predating the Game of Thrones popularity, Dubrovnik has been a known quantity because it is majestic and quaint in scale. For this reason, when a giant cruise ship docks in the port’s deep docks and dumps 3,000 day-tripping tourists, the old city transforms into a pulsing organism of international selfie-sticks and a gamut of languages rarely heard in such small surroundings. 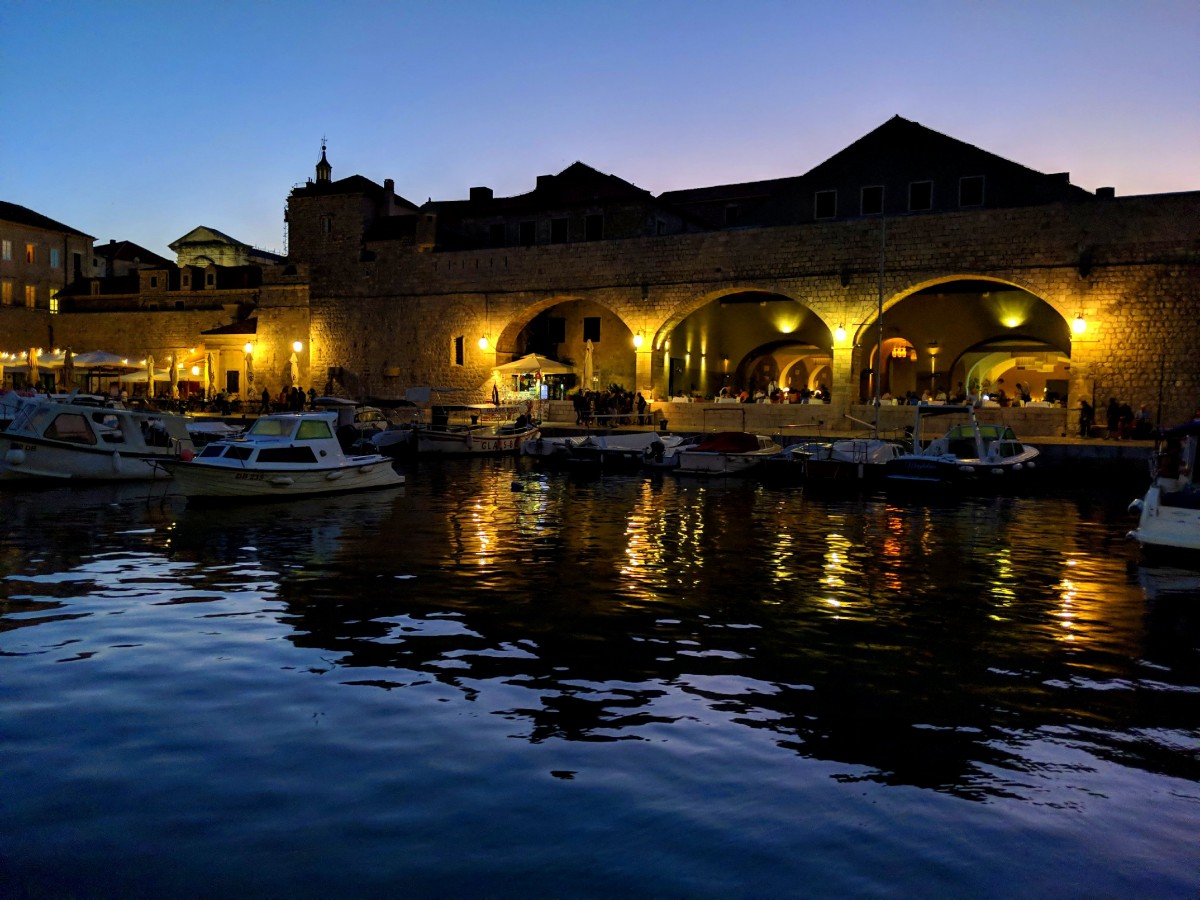 (above: The walls of Dubrovnik as seen at dusk from the inner-harbor)

Our AirBnB in Dubrovnik was a rather compact accommodation that was nautically themed. The owner, a sailing enthusiast and past contractor, had renovated the small place himself. Though the beds were rough and springy, the air dank and poorly circulated, all of the decor and furniture were seemingly built for yachts or ship, and therefore space-efficient. The location was also quite convenient, being steps away from a Korean restaurant and an Indian dinner-spot. 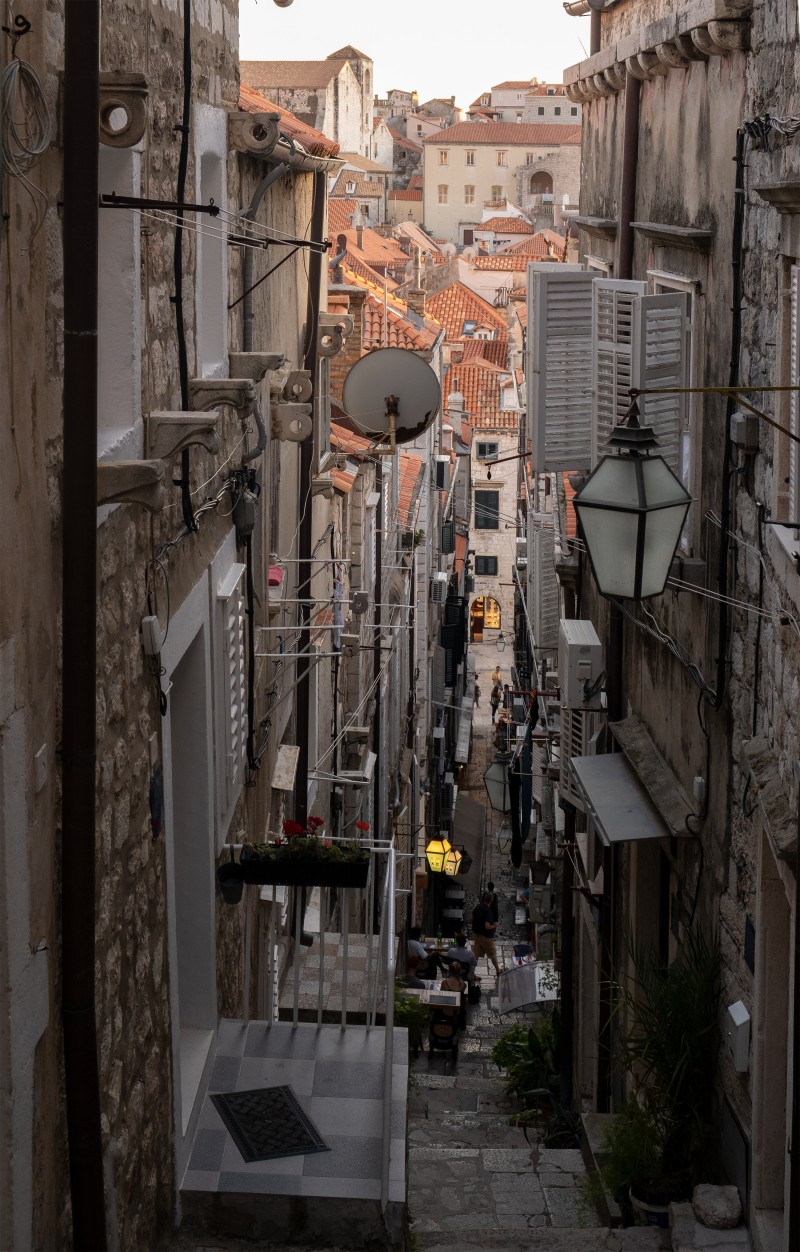 The view from our apartment. The steep slope is not an aberration of photography!

(Above: at dusk this narrow side street blasted the heaters on before the dinner crowd flooded the nearby stradun)

Dubrovnik came with it mixed emotions. Neither calm like Stari Grad, nor dispersed like Split, the city was a full stop tourist destination, akin to Venice or Florence, and therefore the throngs of (even  late-season) tourists was enough to send the three of us seeking out lesser-known spots of the city. But luckily, these were easy to find and in those outings there were many sentimental moments and discoveries.

One of our favorite afternoons in Dubrovnik was an outing to a nearby ‘locals’ beach, the name of which we still do not know. The cove was flanked by tall and steep white cliffs with old houses carved into the stone,  as well as a couple of bars nearby. The water, deep and clear  with  the tell-tale Adriatic green shimmering. We were marveling in the warm sunny swimming  for being mid-October. Below is a panorama of the locals cove.

Here is a shot of Ada in the waters. The great news is that the little one is shedding her water-apprehension and getting downright confident in leaping into water.  She made me take the below picture to send to her English teacher, Ms. Powell. 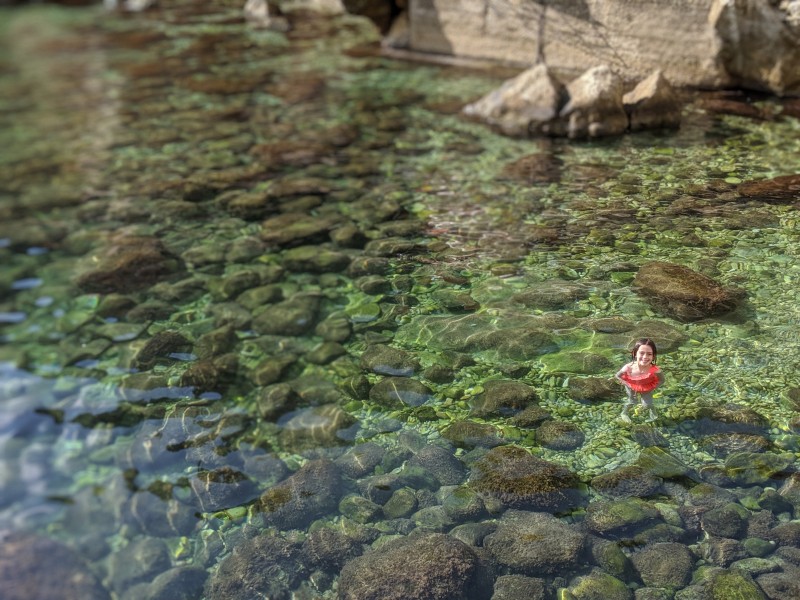 In snorkeling in the green waters, Abby found an underwater cave that led to an isolated little spot full of sea urchins (ouch on my foot!). Even  more exciting though, was that for the second time in  this trip, I saw a mediterranean moray eel lurking under one of the larger rocks about 20′ underwater. I did not have a camera with me,  but it looked almost exactly like this.  Intimidating and alluring at the same time. How close can one get to an eel before the animal  decides that “you’ve gone too far”? 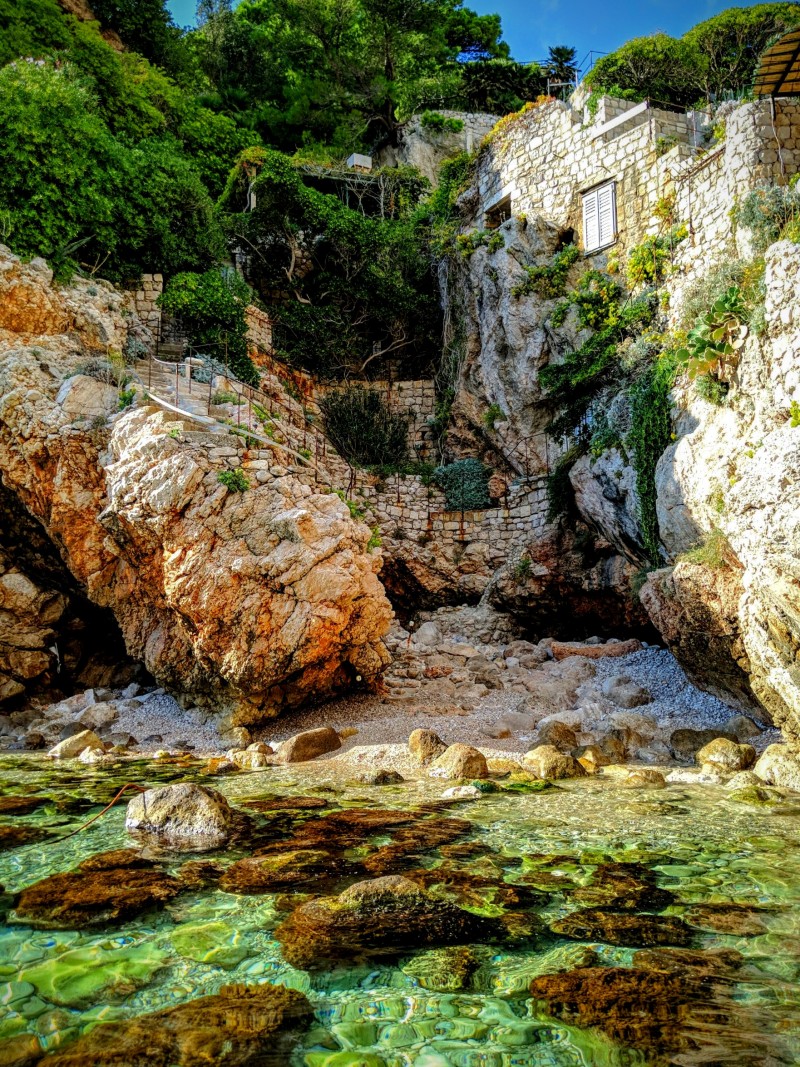 In swimming around, this was my favorite sight…a small cottage tucked away in the hillside. A private cove within a cove that was out-of-sight to most of the world, and presumably accessible to a road at the top of the cliff. I snapped this shot while standing on a rock in the middle of the water. The stone of the houses and rough limestone of the hillside blend in and out.